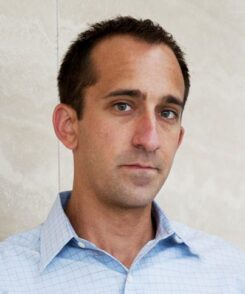 Michael Fischbach is an Associate Professor in the Departments of Bioengineering and Microbiology & Immunology at Stanford University, an Institute Scholar of Stanford ChEM-H, and the director of the Stanford Microbiome Therapies Initiative. Fischbach is a recipient of the NIH Director’s Pioneer and New Innovator Awards, an HHMI-Simons Faculty Scholars Award, a Fellowship for Science and Engineering from the David and Lucille Packard Foundation, a Medical Research Award from the W.M. Keck Foundation, and a Burroughs Wellcome Fund Investigators in the Pathogenesis of Infectious Disease award. His laboratory uses a combination of genomics and chemistry to identify and characterize small molecules from microbes, with an emphasis on the human microbiome. Fischbach received his PhD as a John and Fannie Hertz Foundation Fellow in chemistry from Harvard in 2007, where he studied the role of iron acquisition in bacterial pathogenesis and the biosynthesis of antibiotics. After two years as an independent fellow at Massachusetts General Hospital, Fischbach joined the faculty at UCSF, where he founded his lab before moving to Stanford in 2017. Fischbach is a co-founder and director of Federation Bio and Viralogic, a co-founder of Revolution
Medicines, and a member of the scientific advisory boards of NGM Biopharmaceuticals and Zymergen.