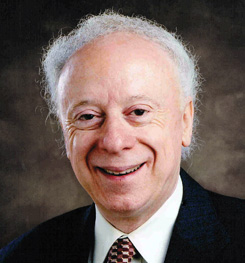 Position: Science Partner
Dr. Goldstein is Professor of Molecular Genetics and Chairman of the Department of Molecular Genetics at the University of Texas Southwestern Medical School in Dallas. He and his long-time colleague, Dr. Michael S. Brown, have worked together for the last 30 years on the genetics and regulation of cholesterol metabolism. Their discovery of the LDL receptor as the major molecule regulating cholesterol metabolism and its genetic disruption in the human disease familial hypercholesterolemia have been recognized by their receipt of numerous awards, including the Nobel Prize in Physiology or Medicine (1985), the Albert D. Lasker Award in Basic Medical Research (1985), and the U.S. National Medal of Science (1988). More recently, Drs. Goldstein and Brown discovered the SREBP family of membrane-bound transcription factors and the elucidation of the proteolytic pathway by which the SREBPs become activated to regulate lipid metabolism. Dr. Goldstein also received the Albany Prize in Medicine and Biomedical Research (2003).

Currently, Dr. Goldstein is a member of the Board of Trustees of The Rockefeller University and the Board of Trustees of the Howard Hughes Medical Institute. He serves on several scientific committees for academic institutions and he is a member of the Science Advisory Boards of Genentech, GlaxoSmithKline, FivePrime, and ARMGO, and is a former consultant to Merck, Schering Plough and Amgen. Dr. Goldstein is also Chairman of the Albert Lasker Medical Research Awards Jury.