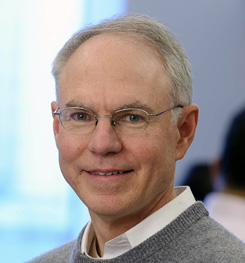 Charles Sawyers, MD, is an Investigator of the Howard Hughes Medical Institute and the inaugural Director of the Human Oncology and Pathogenesis Program (HOPP) at Memorial Sloan-Kettering Cancer Center. His laboratory is currently focused on characterizing signal transduction pathway abnormalities in prostate cancer, with an eye toward translational implications. His earlier research focused on BCR-ABL tyrosine kinase function in chronic myeloid leukemia. This work, and that of colleagues Brian Druker and Novartis, led to the development of the kinase inhibitor imatinib (Gleevec) as primary therapy for chronic myelogenous leukemia (CML), and the discovery that imatinib resistance is caused by BCR-ABL kinase domain mutations. This discovery led him to evaluate second generation Abl kinase inhibitors, such as the dual Src/Abl inhibitor dasatinib, which received fast-track approval at the FDA in June 2006. Dr. Sawyer’s more recent work in prostate cancer has defined critical signaling pathways for disease initiation and progression through studies in mouse models and human tissues. This preclinical work led to the development of a novel anti-androgen ARN-509, a small-molecule inhibitor discovered in collaboration with UCLA chemist Michael Jung, which targets the increased levels of androgen receptor found in hormone-refractory disease.

Dr. Sawyers is past President of the American Society of Clinical Investigation and served on the National Cancer Institute’s Board of Scientific Councilors. He has won numerous honors and awards, including the Richard and Hinda Rosenthal Foundation Award, the Dorothy Landon Prize from the American Association of Cancer Research, the David A. Karnofsky Award from the American Society of Clinical Oncology, and the 2009 Lasker-DeBakey Clinical Medical Research Award. He is a member of the Institute of Medicine and in 2010 was elected to the National Academy of Sciences.